We Should Stand Up for Gay Marriage

Many churches oppose gay marriage because they think it is against the will of God and the teachings of the church. In fact, some parts of the Bible do oppose gay marriage. I think this is wrong because any couple should be allowed to get married wherever they want, and gay people shouldn’t be forbidden from getting married in church because of who they are.

Even people who are not regular churchgoers oppose gay marriage for many different reasons. The arguments include: gay marriage breaks tradition, gay couples can’t have kids, having a mom and dad is better for kids, gay marriage can lead to polygamy, gay marriage weakens the tradition of marriage and being gay is wrong.

Lots of gay couples have kids, adopted or otherwise, and this isn’t exactly new. In the 17th century, King Charles I of England had both a gay father and grandfather.

As for kids being better off with a mom and dad, I have known kids who have two dads or two moms and they are really smart students and good people. In response to the polygamy argument, I ask why gay people would be any more likely to have more than one wife or husband than anyone else?

The Defense of Marriage Act (DOMA) was passed in 1996 and signed by President Bill Clinton and it said that gay marriage was illegal in the entire United States. At that time, public opinion polls showed that the public was in favor of DOMA and opposed gay marriage.

But over time, those opinions have rapidly changed. DOMA was partly overturned by the U.S. Supreme Court in 2013. As of today, 17 states and the District of Columbia allow gay marriage and social media and public opinion polls, slowly over time, have come out more in favor of gay marriage. The first state to legalize gay marriage was Massachusetts on May 17, 2004.

I think change has happened because more gay people are comfortable publicly being gay and more people have come to understand that gay people aren’t any different than they are. Also, there is more public support of gay marriage so politicians don’t criticize gay marriage as much because they know they will get criticized back since there are now so many gay marriage supporters.

My life is a good example of these changes. When my dad was growing up in Kentucky, he didn’t know anyone in his community who was publicly gay. For me, it’s been very different. Two of the first people to see me right after I was born were two gay friends of my family. I have gone to school with students whose parents were gay. There are many gay members of our church. And I have had teachers who were gay. This has taught me that everybody is the same, whether they are gay or not.

My church, Foundry United Methodist, has been so involved with this issue that it even made it into the Washington Post. My church invited Reverend Frank Schaefer to be a guest preacher last December. He had been removed from his job as the preacher at a church in Lebanon, Pa. because he had officiated a gay marriage. (That marriage involved his son!) Schaefer was fired from his church in a trial held by the Methodist Church. He said he could not accept the church’s opposition to gay marriage and said church teachings about gay people were contradictory and un-Christian.

My church supports gay marriage and is working to try to make sure that the whole Methodist church allows gay marriage. Our pastor, Dean Snyder, has performed more than 20 gay marriages even though he’s taking a risk to do that. It makes me feel that we are doing the right thing and it makes me feel good that we invited Rev. Schaefer to our church. Our church has a giant banner outside the building painted in rainbow colors that says, “Stop The Trials!” That means, stop the trials of Methodist ministers who have performed gay marriages.

“My message is an appeal to all GLBT (Gay, Lesbian, Bi-sexual and Transgender) members as well as their friends and supporters, to remain in the United Methodist Church because we’re taking our church back,” Schaefer told our church. “We’re at a tipping point and we can work for changes,” he said. People at our church cheered and gave him a standing ovation.

I’ve been around gay people all my life, and I don’t find someone being gay to be a big deal. But some kids around my area make fun of gay marriage and use being gay as a joke. I think that is wrong and I hope that kids can understand that it’s not something to joke about and you should never say something like that. It just doesn’t make any sense to insult someone else’s life. 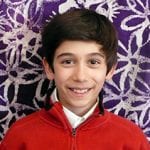