Women in the Media

When I was younger, my mother never allowed me near the television because she didn’t want me to see provocative commercials. I remember being fascinated by the racy commercials I saw on the television when I was older and my mother couldn’t completely shield me from the media. The scantily clad women that I saw disturbed and confused me. As I have gotten even older I have seen more of this provocative and sexist portrayal of women in different places.

I observe the media’s use of women every day. I see women being objectified everywhere I look in society. I see it on posters at the gym, in teen magazines, at the mall, and on the television. I have noticed that the portrayal of women in the media has become more and more sexual in the past years. As I mature, I have begun to realize how it affects the young women around me and even how it affects me. I feel strongly that girls need to be awakened to how they are being manipulated.

The media’s use of women motivates girls to focus on their looks and how other people see them, rather than their own future and education. I am not opposed to accepting and enhancing beauty; I myself care quite a bit about how I look. The problem is that the obsession that girls have about how they look can lead to horrible consequences and unfair judgment of girls.

The way that the media is using attractive women enforces the already powerful idea that prettier and thinner is better. In fact, studies have shown that the amount of media that teenagers consume has a pronounced effect on the way they view their bodies. It often causes girls to fall into depression or develop eating disorders because they have lowered their self-esteem. Concerns about weight and body shape are a huge cause of mental problems and disorders.

A study showed that at the age of 13, 53% of American girls were “displeased with their bodies.” By the age of 17 this percentage has increased to 78%. There are millions of people with eating disorders in America and 90% of them are women. Due to the pressure from both girls around them and celebrities they see on the television, many girls force themselves to throw-up or starve themselves in an effort to look skinnier. Many girls who make fun of overweight girls don’t fully understand the power of their words and actions against the girls they are targeting.

Girls have always had a way of judging each other by how they look on the outside and I have noticed this tendency has become more pronounced in the past decade. What this means is that girls who don’t look like the typical skinny model will most likely get bullied by the girls who have learned to mimic what they see in the media.

As a seventh grader last year, I witnessed many occasions when girls in my grade were judged by their appearances. I remember this happening one day in P.E. It was sunny and most of the girls were wearing shorts. One of the girls was much heavier than most of the girls surrounding me. She hadn’t changed into her P.E clothes and was wearing a flowery skirt. I was sitting on the grass behind a group of chatty girls and I saw them pointing to her and giggling. “That is so gross!” I heard one of the girls say. They were referring to her bare legs that were twice the size of theirs. This particular incident bothered me because the only thing that the girl had done to earn their criticism was to wear a skirt to school. The only reason that this was any different from any other girl wearing a skirt, was her weight and the appearance of her legs.

On another occasion towards the end of the year, I came into class to find a group of boys going through a yearbook and labeling the girls in it. At certain intervals they would whistle in appreciation or make noises of disgust depending on their opinion of the girl in question. My teacher was standing right next to this group of boys but he never stopped them. I wish he had told them that their activity was very offensive and disrespectful.

Throughout my middle school years I have seen this kind of behavior in both boys and girls. I believe that it is natural to act like this while growing up, but this behavior and analyzing of the body has become more extreme. Especially now with the mask of the internet, teasing and taunting has become much easier for the bully to target girls.

I think that as we mature, many girls and boys will learn to treat all women with respect and not be judgmental. Some women, however, always feel the pressure from the media to dress provocatively and look attractive. I have asked grown men about what they think of women who display their bodies and try so hard to look sexy. What I heard was that men usually lose interest and respect for women like this and the way they use their bodies.

Women need to be encouraged to become strong and talented and set higher standards for themselves. Women who are portrayed as beautiful as well as smart in the media will definitely influence girls my age significantly. Hopefully, since middle school girls spend so much time watching advertisements and using the internet, seeing strong and successful women in these venues would set a much better example. I feel confident that America would have many more women in leadership positions if young women saw that being considered pretty isn’t the best way to have a fulfilling future.

There are 196 countries in the world now and only 20 of them have female leaders. (Miss Representation). I hope that with the encouragement of influential figures, girls can realize that they don’t need to be sexy to earn attention and more women will rise to positions of power. Women have many qualities to offer and have the ability to make a great impact in the world. I hope that women in the near future will develop higher goals for themselves and become more respected adults. 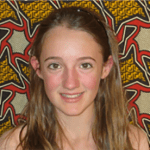