Tales of Adoption and Courage

I was born in the Bronx section of New York to parents who are only vague memories to me now. When I was about two or three years old my biological father and mother divorced and my biological mother took me to Korea, my “homeland.” For two years, I lived in a one-room house with a barely working stove and a tin roof over my head.

After a while, my mother grew terribly sick and had to be hospitalized. Soon after, I was checked into an orphanage by order of my mother, where I lived for six months. I have not seen my mother since that day at the hospital. After the six months that I lived at the orphanage, my biological father, a man I did not remember very well by that time, came to claim me as his son, and took me to New York. Living with my father in New York was not much different from living with my mother. He was constantly working and never had any time to really look after me. Unfortunately, I was not able to continue living with my father, and he brought me to the Korean Family Service Center (KFSC), to see if I had a chance for a better life.

After a week, there was no word from my father. Pretty soon, we had learned that he had severed all contact with the KFSC. A couple served as temporary Foster Parents and after about a year, they officially adopted me and made me a part of the family. Shortly thereafter, we moved to DC where we now live. This rather bumpy early childhood reminds me every day that many people around the world are not as fortunate as I am.

What are the situations that cause parents, who unconditionally love their children, to put them up for adoption? Is adoption the best choice? And what kind of emotional, mental and even physical problems do young adults face after adoption? The reasons parents put their children up for adoption include: poverty, inability to take care of children, restrictions on number of children per household, and poor living conditions.

According to the National Association for Adoptive Parents (NSAP), over the past few years open adoption rates have skyrocketed. In fact, in the past ten years the international adoption rate has more than quadrupled from a mere 5,000 adopted each year to at least 26,000 a year. Thirty-one percent of all adoptions are from Asian countries such as South Korea and China and almost two-thirds of all adoptees are girls.

In contrast, Open Adoption is when the biological parents have a relationship with the adoptive parents of their child, as well as the adopted child. In most Open Adoption cases, the biological parents know their child and the child knows them. Of course, this depends on the decision of the adoptive parents as to how much they will allow the birth parents to contribute to the child’s life. This kind of adoption also puts the child into a better mental state, since they know their parents and why they were put up for adoption and that the adoptive parents love them. Researchers have weighed the consequences and the benefits of both choices made by parents, and have concluded that the healthiest type of adoption is an Open Adoption.

Unfortunately, my adoption was a Closed Adoption, because my adoptive parents do not have contact with my biological parents at all. This is not necessarily by choice. We do not actually know the whereabouts of my biological parents. Sometimes I feel upset that I do not know my biological parents. However, I feel lucky with my current life and I live with a great family, have friends, go to school, play sports, read, and live a normal life. Many people do not realize the sacrifices that their biological parents made and feel that they were abandoned. However, this is often not the case. Many parents who give up their children feel remorse for what they did and try to find a place where their child is able to thrive. In my case, my biological father made a selfless choice and had my best interests in mind.

I hope my story and my experiences will inspire other children who are adopted to tell their own stories, and to appreciate the sacrifices that their biological parents made. Recently I have come to realize that my biological parents made their sacrifice so that I could have the life they never had. Nowadays, I still consider myself a full-fledged Korean despite the fact that I now belong to a very interracial family. If someone were to ask me what I consider myself racially, I would say, “I am first and foremost an American, who is proud of his ethnic background, which is Korean.” My father happens to be half Korean and my mother is fully Chinese; however, these differences in ethnicity promote a sense of multiculturalism in our family. I celebrate the lunar New Year and other Chinese holidays with as much excitement as my adoptive family. Moreover, I love Chinese food, and am grateful to have a mother who cooks so well.

Adoption is becoming more and more popular. Many parents in the United States are adopting children from countries such as South Korea, Ethiopia, Russia, Vietnam and Haiti. Extreme poverty, disease, parents who are unable to take care of their children and many other socioeconomic factors play into the adoption rates of many countries. Many people have the notion that adoption only occurs when children are abandoned and left to die. In some cases this is true, but in far more cases, it is not.

My advice for adoptees around the world is to accept and appreciate the fact that they were adopted. If you live a life where you choose to reject and be angry, you miss the point of why you were put up for adoption. Like I have said before, adoption is a selfless act where parents make the choice to give up their child to someone who they don’t know very well so that their child can have a better life. I have not seen my biological parents in over ten years. I hardly remember their faces, but the faint memories I have are of sickness and poverty. One of my life dreams is to go to Korea and find my biological family, to tell them I am so grateful for what they did for me. 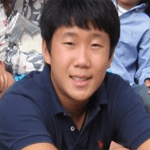