Social Media is the Cause of Self-Worth Issues

The toxic beauty standards that social media and society expect from young people between the ages of 12 and 20 negatively affect their self-worth. Social media platforms such as Instagram, Tiktok, Twitter, and Facebook need to start taking responsibility by making a change in the negative influence they have on young minds. Secondly, society needs to change its perspective on beauty standards.
Some may say that social media does not have an impact on young adults or teenagers. However, young adults and teenagers often cite social media as the reason behind developing eating disorders, self-harm, anxiety, and depression, all caused by the many advertising images uploaded on social media platforms. It is believed that the value of social media lies not in the hands of influencers, creators, or platforms themselves, but in the hands of ordinary users. Nonetheless, social media platforms such as Facebook, Instagram, and Twitter often allow their users to post disinformation. In an Insider article called, “The Sneaky Ways Social Media Can Sabotage Your Body Image,” Erin Heger states, “Social media negatively affects body image by over-exposing you to “idealized” body types.” Therefore social media is the main reason as to why many young boys and girls start comparing themselves to the body image they are supposed to look like according to these platforms.

The dilemma with social media is the power it holds over society’s beauty standards. Many people let social media determine their beauty because of the direct influence of how social media has affected the way they perceive themselves. Some typical beauty standards on social media are girls with slim figures, clear skin, and a nice clothing style. The article, “The effects of social media on body image and mental health” written by Javier on January 18, 2021, states that NHS Digital (Non-departmental public body) released data in 2018 showing how the hospital’s admissions due to eating disorders have doubled in the past 6 years. Clearly, the beauty standards created by society exposed on social media took an effect on young girls. As a result of all the mental and emotional impacts, this problem pushes human beings to develop unhealthy relationships with food. Social media and society are the major factors in shaping young males’ and females’ perceptions and presentations of beauty and masculinity.

There are two forces at play here, and both have their part to play in promoting body positivity. First, social media needs to start taking responsibility for the effect it has on young people’s self-worth. In addition, we, as part of society, need to change our perspective on beauty standards. According to the article, King Influencers, bringing awareness of the issue to society can help create a society that aims for body positivity without physical characteristics that are impossible to reach without digital manipulation. If society were to normalize how each individual’s bodies differ from one another, then people wouldn’t feel the pressure of fitting into society’s beauty standards. Social media is responsible for young people suffering from self-worth issues. We can change the effect social media has on young people by using influencers to set a positive example. The King Influencers article further notes, “Banning something usually doesn’t solve the problem. Put more emphasis on transparency. Divulging edits and discussing the issue are the only ways we can develop awareness and move forward together as a society.” In other words, banning social media won’t solve the problem, but making a change in society and beauty standards makes a big impact. There are other many ways to solve this problem, including having users promote body positivity and showing more transparency in their posts. This will make an impact on young people who suffer from depression, anxiety, and an eating disorder.

At the beginning of this project, the theme I chose was eugenics, but I wanted to write an essay on an important problem that matters to me. That’s when I chose how young people develop self-worth issues because of social media. The connection I have with this problem is based on how I was affected by social media during Covid. I wanted to fit into the beauty standard created by society, but I didn’t realize the side effects it would cause. It brought me to constantly compare myself to girls shown on social media. I stopped eating for weeks, I was very weak mentally and physically, and the worst time of all was during my recovery. When I started eating again, I couldn’t help but think how much weight I’d gain after eating one bite of food. Later, through my recovery, I realized how filtered social media can be, and the beauty standards in society can intoxicate young minds.

Taking everything into account, society and social media play a big part in how a person determines their self-worth. Thus we as a society need to change the beauty standards and have social media take responsibility for the effect it has on young minds. We need to take action. This problem has been going on for way too long now, and we must put an end to it. 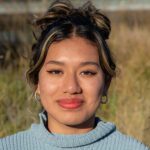