Imagine walking into a white-owned grocery store in 1955 on a Sunday, buying candy and walking out, looking back at the owner, smiling, leaving. Have a great rest of your day with your cousin not knowing later that night you’ll be killed for “offending” a white woman. Just imagine, being killed for smiling at a woman, later being accused of something you didn’t do and years pass by until the lady confesses you didn’t do anything to her but smile. How would you feel? According to Mappingpoliceviolence.org, there are 2,519 African Americans who have died due to police brutality. Wait, that’s incorrect, actually 2,523. That number should’ve never gone up. This number of deaths shouldn’t be this high and mostly shouldn’t have a number around thousands or hundreds. Everyone’s life is valuable just like yours. What if I told you that there are over 10,072 records of people who have been killed by police from the year 2013 to 2022, Oh wait I meant 10,085. When I first checked out the website Mappingpoliceviolence.org on April 2nd I clicked the link that says “view the data” there were 10,031 records of people who have died due to police brutality/violence, April 19th is the second time I checked, I was appalled to see the 10,031 records rose up to 10,072, now it’s April 20th the third time I’ve checked, I was disturbed to see that 10,072 go up to 10,085. A lot of people have died from cops, some with a weapon and most without. The sad part about it is that 169 people have died due to police violence this year to ages as old as 68 and as young as 12.

In my opinion “I felt attacked“ shouldn’t be an answer for a police officer to say. 90% of the time police officers are armed and the suspect isn’t. In a fictional novel named “ghost boys” based on a police officer shooting an African American boy and in court stating “he felt attacked” by a 12-year-old boy the same height, size and age as his daughter. The novel is based on a 12-year-old boy named Tamir Rice who was shot by 26-year-old officer Timothy Loehmann. What I really think the author was trying to say in the book was that the officer was scared of an African American just by the color of his skin, I’ll repeat that. A 26-year-old man, grown and has a child of his own, the same size, height and age as Tamir was afraid of Tamir? A 12-year-old boy? An unarmed 12-year-old boy that a grown man is afraid of. How confusing? Books like “Ghost Boys” and “Dear Martin” should be recognized more. In the book “Dear Martin” the book is about a 17-year-old named justice who has excelled in school and has a scholarship to Yale and has his whole life planned out but gets wrongfully arrested by an undercover cop assuming he and his best friend committing a crime for the color of their skin, later an off-duty cop gets triggered by justice bringing up a statement about race and shoots his best friend. With that image and moment stuck in his head it changed his mind about what race is, so he wrote letters to Dr. King.

What if I told you that African Americans and non-whites also get racially profiled in stores too. Thegaurdian.com states “in a new survey, more than 90% of African American shoppers said they had experienced racial profiling while buying or browsing – a phenomenon sometimes known as ‘shopping while Black’.” Let me tell you a true story then. One day when me and my mom went to a store like we always do, an employee followed us around the store, each aisle, up the escalators, down the escalators, everywhere. As soon as we get into an isle with this other woman, who’s wearing a tote bag shoving groceries in her bag, and then leaves, the employee is still watching us and not paying attention to the lady stealing in front of her, we saw the woman walk out the store without anyone questioning her and employees greeting her out with no censors going off. The whole time we were in the store we saw the lady not getting followed because she was a white woman, but for me and my mom, we are African Americans and we get followed around, then I realized that almost every non-white person in that store had at least one employee following them around or near them. This situation where non-white costumer gets racially profiled in stores happens to me and my mom every time we go in there, on April 21st me and my mom went into the same store, as we were walking to check out me and my mom froze, we saw a white woman stealing once again in front of employees, putting hair conditioner in her bag and no one stopped her. But this makes me wonder. Are the employees trained to follow non-whites in stores? What makes an employee think a person feels comfortable getting followed around the store?

These are what some customers said according to the survey Thegaurdian.com provided “My wife is Caucasian. I was following behind her at a clothing store when she was approached by an employee who warned her that she was being followed by a ‘strange’ black man.” Another also said “The last time that I went to the hair store to buy extensions, the cashier/owner tried to subtly follow me around the store. When I had been looking at a product around a corner for a while (not visible in view), she showed up around the corner and asked if I was looking for something specific. I told her ‘No, I’m just deciding’ and she (seemingly) walked away. When I came around the corner, I realized that she was still there, she was just watching me from a different angle.” The employee who told the man’s wife “there was a strange black man following you” makes me angry, seeming as though she couldn’t assume that they were friends or partners and that she had to put the title of him as a “strange black man.” What made him strange? Was it because he was black? One thing I know I’m stunned by is how white people have stolen things and have done many wrongs, but the minute one African American, Hispanic, or Afro-Latina/Latino does one thing wrong, they look at us as the bad guys?

Now that I’ve given out information about police brutality and racism in different areas and ways, people’s experiences about what’s happened to them, evidence, and some reasoning I feel like for the police officers who have racially profiled someone (did not kill them) should get the penalty of losing $300-400 of their pay and for the staff in stores or departments, they should read the full survey that I took quotes from, and read what those people said and be trained not to follow someone in the store for absolutely no reason. Now, I want you to imagine walking into a White-owned grocery store in 1955 on a Sunday, buying candy, walking out smiling back at the owner. As you walk out, you hang out with your cousin all day, knowing later that night you’ll be at home with your family and wake with a smile the next day. That’s how it should’ve been. 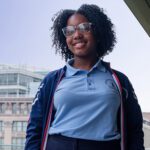