Misinformation and Racism in Schools

Good Evening, my name is Chiamaka Ogbonnaya. I am a scholar at E.L. Haynes and I am in 5th grade. My discussion here is about Racism in Schools and the Misinformation that fuels its rise. One may well ask, what is racism and how does it affect students in our schools?

Well, the definition of racism has various schools of thought. However, most people agree that racism is the belief that different races possess distinct characteristics, abilities, or qualities, especially so as to distinguish them as inferior or superior to one another. Others, hold a view that racism is prejudice, discrimination, or antagonism directed against a person or people on the bases of their membership in a particular racial or ethnic group, typically one that is a minority or marginalized.

At any rate, a look at contemporary literature suggests that the curriculum used in many schools and educational departments, miseducated blacks and other minorities to believe that blacks are of less value than whites. In 1933, Carter G Woodson wrote, “ Education is used to maintain white dominance by socializing whites to believe that they are superior, while simultaneously internalizing a self-hatred within black students.

Indeed, part of the reason why racism is very prevalent in our schools is because teachers are feeding students misinformation about the history of racism in America. Spreading wrong information can misguide students. Students in our school use a lot of racist comments against people without realizing how emotionally hurtful their words are to the victim. Unfortunately, some of the perpetrators think this is normal behavior and laugh about it casually.

Also, the school curriculum that our teachers use in teaching students is made up of lies and falsehoods. For instance, White Europeans and Americans went to Africa and used various threats to forcefully kidnaped citizens of African countries to Europe and America for free labor. Regrettably, these same white people later lied that the Africans they kidnapped came here of their own free will and for the purpose of getting employment. What a shame!

Thus, our teachers who ought to know better, are instead, helping to peddle their lies against black and minorities in an attempt to make blacks feel inferior to them.

For example, slavery and racism. Some people were blinded by racism to believe that they are more superior than others; hence, they went to Africa with guns and modern equipment and conscripted African people and forced them to come to America in order to have a free label. Later on the same people because of racism, spread lies that the people they forced to come to America were just in America to work. Unfortunately some teachers who could be racist themselves are helping to spread the same lies to their students by teaching them that there was no slavery and not correcting the word chosen in the textbooks and books they teach to their students. These teachers could research and get information instead of peddling the lies of slave masters to their students.

Teachers know better. They are taught the background of America’s troubled past racist behavior while they are in school. Sadly, they still choose not to correct the misinformation in their textbooks and the way they teach students. For example, according to Newsela, “a ninth-grade geography textbook referred to African Americans who were transported to the Americas between the 1500s and 1800s as “workers” instead of captured or enslaved people brought against their will.” When teachers see something untrue in their textbooks they need to give additional context that shows what actually happened, instead of just providing the fake or incorrect information.

Additionally, school leaders need to take a stand against racism in schools and come up with plans that meet the issues in their schools. School leaders can get the help of students who are trying to correct these issues. They should involve the community to try and correct the problem with them. A student named Ugbaja decided he wanted to correct the problem of racism in his school so he organized a meeting with the head of his school to dialogue about how to make changes in the behavior of teachers and students alike so that racism can be reduced or eliminated in our schools.

In conclusion, we need to stand up to issues like Racism in schools and Misinformation. If we stand up, we can make a difference and convince people that it’s not okay to be racist and not okay to spread misinformation that harms the Psycho-Social well-being of our students, staff, teachers, principles, and what have you! If we can make this effort together, if we dare to, we will be closer to realizing what my hero and an icon of the civil rights movement in person of the late Dr. Martin Luther King Jr. said,” I have a dream, that my four little children will one day live in a nation where they will not be judged by the color of their skin but by the content of their character.” 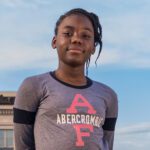