Thousands of Ethiopians leave their home every year and many of them arrive in America. Like my family, they start their lives from scratch. My family’s story of global migration started a few years ago when my parents moved to the United States from Ethiopia’s capital, Addis Ababa.

An immigrant is a person who moves from one region or country to another. The term “migration” is the movement from one country or location to another. The United States is the country most people in the world migrate to. Migration is at the core of the country’s founding as immigrants from Europe were the first to establish America.

Without global migration the world would not be as rich and diverse. Nearly every culture would only exist and grow within its own communities.  Global migration allows people to share and benefit from new ideas, custom, values and foods.  Most immigrants into the United States come from Mexico, China, Philippines, India, Cuba, Colombia, and Ethiopia.  However, immigrants from every other country in the world also come to the United States.

People migrate and become immigrants every day.  This has occurred throughout human history.   With migration, our world and culture are always changing and the places people leave and the places they go are all affected.  The changes on culture from global migration leave a mark on a region including its languages, religious practices, traditions, architectural styles, local foods, art, music and clothes.  Understanding a region is to understand its migration story.

When people move from one place to another they are often hoping to find a better life. Many families migrate because they want to rejoin a family member. Others seek employment, religious freedom, or the opportunity to learn new things at colleges. There are also extreme reasons why people migrate such as war, natural disaster, and political unrest. Countless people from Ethiopia, for example, have fled due to of years of political unrest.

Unlike some global migrants, my family did not have a choice to come to America. A few years ago my father became very ill. He went to almost every hospital in Addis Ababa. Finally, one of his doctors told him that the cure for his unknown illness could be found in America. While this was a shock for the whole family, we luckily had a family member already living in America. Due to medical and financial issues we all had to make the trip to America. For a period of time it was devastating to have to leave and see my whole life escape me before my eyes. Ethiopia was home.

In Ethiopian culture, respect really is the most important thing in our culture. Without this foundation of respect, the key to our culture would be lost. As we got ready for the move to America, I realized that even though I was going to be moving with my mom, things weren’t going to be the same. I clearly understood that no matter what country I was in, it was never going to be the same. For millions of migrants, this same feeling must be common. I wanted the time to go as slow as a turtle but it was moving as fast as a cheetah. I wanted to take my whole country with me.

Accessing accurate statistics on the total migrants in the United States each year is difficult. The Department of Homeland Security only counts those people who are lawfully here with green cards or other forms of temporary residency. Their statistics report that 1.3 million immigrants came to American in 2006. If you include all other forms of immigration, this number could be closer to 2 million each year. The issue of illegal immigration is growing into a serious problem in the United States.

When people migrate they often fear feeling unwelcome and difficulties adjusting to the norms of a new culture. New people, a new home, and a new culture were all overwhelming and I became homesick. However, I soon learned about the beautiful Ethiopian community in the city I live, Washington, DC.

Many immigrants start cultural community groups to help sustain and expand their customs in new cities and towns. Some ethnic groups build community centers to meet and interact. Migrants try to keep their customs  alive in whatever country they are. It’s important for us to keep our culture alive, even though we are in a new place. The Ethiopian culture in DC is known as “Little Ethiopia,” and has restaurants, shops, cultural centers, and businesses that add to the local community. These places also teach others about the culture of Ethiopia. This community helps me to feel more at home.

My father is now in a good health and even though my mom and I had been through a lot, this experience made me realize much about who I am both culturally and nationally. The reflection of being a global migrant has shaped my identity and I’ve learned that in the United States, there are people representing every country in the world. Not every kid in America is originally from this country, and in fact, there are thousands of kids like me moving here each and every year. 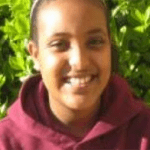