Can you imagine what it might be like to not have enough money to feed your family? Or, what if the nearest grocery store to your home was five miles away, but you did not have a car? These are real-life problems faced by people in Southeast, Washington, D.C. everyday. In this part of the city, most residents rely on corner stores to buy food, because full-service grocery stores are too far away. Furthermore, the food at the grocery stores that are in Southeast tends to be of lesser quality and more expensive than neighborhoods where there are more stores. This situation is particularly unfair, because the people who live in Southeast are on average the least wealthy people in the city. The U.S. Census Bureau statistics for 2005-2009 state that the average household income for Ward 8 was $44,076, compared with $115,016 for other ward households in the District of Columbia (Homan). Even though some get government assistance, it still is not enough to live off of without making sacrifices. This is a real problem that needs attention by creating programs to ensure that all families can afford and access the food they need.

Recently, I had the chance to understand the problem of food inequality firsthand. Along with other students, I participated in a community service program with the organization City Year. During the weeklong program, D.C. Greens, a food program, came to talk about food injustice. They also gave us a scenario to solve based on a real family in D.C. We were given the task of buying groceries for a family of four with $112. We were given a list of the health problems each family member had, which determined what they could and could not eat, along with stores near them, and the real prices of the food in those stores. During the activity it was difficult for us to figure out how to purchase all the food that was needed. In the end we agreed that all the food that was needed could not be purchased with the amount of money we had. Even though it was a mock exercise, this is a reality that many people have to face everyday.

My mother has also experienced food injustice. She told me that, “growing up in Southeast D.C. (Ward 8), the Safeway on Good Hope Road, where we shopped, would receive meat that had a past due expiration date. Most of the produce we received from the Safeway located in Georgetown was marked down to a reduced price. The quality of the produce was considered unfit for the upper class residents in Georgetown but was deemed edible and safe for consumption for the lower class residents in the poorest parts of the city” (McBride). Why would people even bother trying to buy healthy foods if it is not of decent quality? Over many years there has been food inequality in grocery stores leading to areas called food deserts, where people do not have access to the quantity and quality of food they need. Areas of high social classes tend to have grocery stores that carry high quality foods, while those of low social classes tend to carry low quality foods. To break it down even further, poor quality foods are more common among minorities, especially black people in low social classes. In order to break this trend, the government should ensure that there is proper infrastructure for high quality grocery stores in all neighborhoods.

People who are more privileged have grocery stores with the best food quality in their neighborhoods. An illustration of this is that, “the more affluent population subgroups are not only healthier and thinner, but they also consume higher quality diets than do the poor” (Darmon). Since high quality foods are more expensive, only people in higher social classes can afford them. This means that people from lower socioeconomic classes are more likely to be vulnerable to poor nutrition and vitamin deficiencies. The areas of high socioeconomic classes also have more stores available. According to Foodtrust.org, “In Washington D.C. the city’s lowest incomes (Wards 7 and 8) have one supermarket for every 70,000 people, while two of the three highest income (Wards 2 and 3) have one for every 11,881 people”. As one can see, in D.C. higher income households have better access to food and a wider variety of places to shop. This is an issue because those living in Wards 7 and 8 already have a disadvantage when it comes to purchasing quality food due to their income, while those living in Wards 2 and 3 can take advantage of the access they have to stores and the better food options. This is why the overall planning for infrastructure in the city should take lower income neighborhoods into consideration.

People in underclass neighborhoods have grocery stores with low quality foods, which often leads to more problems with their health. According to Tatiana Adreyeva, “… stores in lower income neighborhoods (compared to those in higher income neighborhoods) stock fewer healthier varieties of food and have fresh produce of much lower quality.” This is an issue because populations in these types of areas are at risk for poor health. The food deserts in these lower income neighborhoods increase the challenges of accessing high quality food. A food desert is an area where people have little or no access to healthy and affordable food. In other words, the nearest supermarket or grocery store may be miles away. For example, Foodtrust.org states, “What can be found in great abundance, are convenience stores and fast food restaurants that mainly sell cheap, high fat, high-sugar processed foods and offer few healthy options.” Consuming mediocre foods can result in an array of health issues such as strokes and high blood pressure. Therefore, it is city officials’ responsibility to create more adequate food places for people to shop.

Additionally, unsatisfactory foods are common among black communities. Based on the findings from Foodtrust.org, “For decades, low income communities of color have suffered as grocery stores and fresh, affordable food disappeared from their neighborhood”, it can be argued that food inequality is a racial issue. This can be supported through the data from the article “African-American Diet” which states, “In comparison to other races, African Americans experience high rates of obesity, hypertension, Type II diabetes and heart disease which are all associated with an unhealthy diet.” The fact that African Americans lead in these health issues indicates that food inequality is a racial issue. In order to develop a nation that is built on equality as an ideal, one place we can start is by providing equal opportunities for access to healthy foods in all neighborhoods.

Some may argue that high quality foods are available to everyone; people just make poor decisions regarding the food they eat. This is not the case. For example, “Households with fewer resources (e.g., SNAP houses, WIC households) are considerably less likely to have and use their own vehicle for regular food shopping than those households with more resources” (“Why Low-Income…”). As one can see, it is nearly impossible for everyone to have access to grocery stores with high quality foods if low-income homes have little transportation options. Catching the bus or train makes it difficult to get as much food that is needed.

Another key factor is that high quality foods are expensive, and people in low-income households, many of whom are often Black and Hispanic, cannot afford it. People in elite neighborhoods can afford the expensive food, while people in poor neighborhoods have difficulties purchasing the best, higher priced food. This is an important problem that needs to be solved because if people continue to consume these low quality foods it will lead to health problems. Families are then stuck in hard predicaments trying to pay for health care and basic necessities without struggling and cutting some things out.

Food inequality is a serious issue for low-income families throughout cities in the United States because it often results in health issues, which cause more money problems, especially for minorities. Everyone should be able to eat healthy, fresh foods, not just those who live lavishly. Because I am African American, I am faced with this disadvantage. When I live on my own, I have to determine what the consequences may be living in a particular place. It will be necessary to think about whether the food availability and the quality will worsen, remain the same, or improve. The government needs to guarantee sufficient infrastructure for grocery stores in all areas. In addition to that, however, there are things we can do at the community-level. For example, organizing weekly carpools to farmers’ markets or grocery stores, starting a petition, or creating neighborhood gardens that meet on the weekend to exchange or sell food to each other would all assist people in gaining access to food they need. While exploring this scenario with D.C. Greens, I got a deeper understanding how difficult this problem is for families, as well as how important it is that we as communities should work together to solve them. 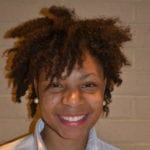