The worldwide population is 7.7 billion and the internet has 4.4 billion users. This number is growing daily. There are nearly 3.5 billion active social media users, and every 6.4 seconds a new account has been created. Every user has an average of 7.6 social media accounts. They spend around 2 hours and 22 minutes on social media every single day. Social media has grown wildly over the past few years. Surveys by the American Academy of Child & Adolescent Psychiatry show that over 90% of teens (13-19) have used social media, 75% of those teens have active accounts, and 51% have reported using these accounts daily. We as teenagers should all work collaboratively to change the way social media impacts our peers and ourselves negatively by taking responsibility for our actions online.

According to King University Online, “Studies have shown that the amount of time spent on social media is associated with negative emotions.” As teens quickly approach adulthood, we should become vigilant about our connections and the people we interact with online. This can help the way we react and respond to negative messages. While social media can sometimes be beneficial in ways that can help young people develop their interests and find other people who share the same interests, it’s important to be aware that social media is associated with several issues and potential damage including stress, anxiety, loneliness, and depression.

An opponent might point out that a Jan. 2015 study published in the Journal of Applied Developmental Psychology said college freshmen should use social networking sites to build networks of new friends, feel socially integrated at their new schools, and reduce their risk of dropping out. However, what this study failed to point out was that students who used social media had an average GPA of 3.06 while non-users had an average GPA of 3.82. Another study found that grades began a steady decline after secondary school students reached 30 minutes of daily screen time. After four hours, average GPAs dropped one full grade.

The Library of Congress has been archiving all public tweets from Twitter’s March 20006 inception forward. Information about an affair posted on Facebook, for example, can be used against someone in divorce proceedings because the information, once posted, can never be completely deleted. So imagine wanting to become a public figure or a person with high authority in the future but something you did in the 8th grade gets brought back up and affects your future, the way people view you and your opportunities.

A study published in the journal Science found that lies spread six times faster than truth on Twitter, and “fake news” is retweeted more often than true news. In the three months before the 2016 US presidential election, false news stories about the candidates were shared a total of 37.6 million times on Facebook. A federal grand jury indictment announced in Feb. 2018 by Special Counsel Robert Mueller said that a Russian group created phony social media accounts “to reach significant numbers of Americans for purposes of interfering with the U.S. political system.” A University of Michigan study found that even when false information is corrected, the number of people who see or share the correction via social media is lower than the number who saw or shared the false information in the first place. If adults can be so easily manipulated by social media, how much more vulnerable are teens? During adolescence, the teen brain goes through dramatic changes which scientists are just beginning to better understand. For parents, teachers, and anyone who cares for a teenager, it is often difficult to help a teen navigate the broad range of challenges that accompany the complex changes occurring in the body, mind, and brain.

As a teen who uses social media, I see my peers and siblings being affected negatively. I want to address this issue more and bring it to the light. I don’t want to grow up in a generation where people have been blinded by the fact that they have been under prolonged exposure to negative platforms. Social media is globally used for more negative purposes than positive. It takes everyone to work for our future but it starts with one person. All I want is to at least make an effort to bring positivity to social media. Even though social media is such a big part of our lives, we should make an effort to make it a positive experience for everyone, especially the younger generations who are our future leaders. For “If you cannot do great things, do small things in a great way.” – Napoleon Hill 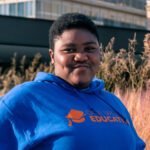