What is someone that speaks two languages? Bilingual. What is someone that speaks many languages? A polyglot. What is someone that only speaks one language? Thus begins the joke that a teacher once told me. While I giggled at this joke, as time has gone on, jokes such as these have only made me feel more upset with and slightly ashamed of the country that I come from. The sad fact is that, as much as I would not like for this to be true, it is: citizens from the United States have an embarrassingly high rate of monolingualism. In an increasingly global world, this is unacceptable and needs to change. But how should this change be brought about and with whom?

I was raised in a mostly monolingual household. While my immediate family spoke English, we also sprinkled some Arabic into our daily life. Our Arabic was reflective of our religion, Islam. Believers of Islam are referred to as Muslim. When I was 11, my family moved to Yemen. My stepfather, who was fluent in Arabic, attempted to teach me more Arabic words in preparation. Moving to Yemen was an immersion experience. In school my teachers did not speak English, although there were other American students that helped me. While my speaking skills did not improve much, my writing skills did greatly. After leaving Yemen after only a few months, my skills shriveled to almost nothing.

Arabic, as I later learned, is a very interesting language. It is a Semitic language, like Hebrew, and is spoken throughout the Middle East, North Africa, and in Asia in many varieties. Most Arabic speakers live in the Middle East and North Africa. It is also one of the main languages of the United Nations. Approximately 221 million people speak Arabic, making it one of the most highly spoken languages in my country. Arabic has a very unique script, which, when written correctly, flows from one letter to the next. For some, Arabic may represent their heritage or their Islamic religion.

Of the 221 million Arabic speakers worldwide, in 2001, there were over 760,000 people who spoke Arabic in their homes in the United States. These speakers may originally be from the Middle East or have learned it as a result of practicing Islam. Islam’s holy book, the Qu’ran, is written in Arabic. In the U.S., many speakers from Arabic-speaking countries reside in major cities such as New York, Los Angeles, and Detroit.

For all of those only-English speakers out there, for me, as a student in mostly public schools, foreign language education was low. I did not receive sufficient language education for an extended enough period of time in middle or high school. My family mainly speaks English. With all of these factors, it is not surprising that I could not fluently speak another language by the time I entered high school.

My eyes were opened to this issue when I took Spanish in high school. I had an excellent Spanish teacher who made the language enjoyable. I took a volunteering trip to Paraguay with her that summer. Using Spanish among native speakers made learning another language seem like a necessary skill. When I decided to volunteer in Honduras two years later I did all that I could to improve my Spanish. I watched Spanish media, asked for a computer program to help my speaking skills, and bought multiple books in which I would do grammar exercises daily. Even though I could only comfortably speak English, I was working hard every day trying to learn Spanish. I felt like I, a person who was putting much effort into acquiring a second language as an adolescent, was being unfairly judged by people who had the opportunity to learn another language from childhood. I got tired of hearing the monolingual American stereotype.

The introductory joke of this paper, unfortunately, has much truth to it. According to a 2007 census report, about 72.4 million people in the U.S. aged 18-40 can only speak English and about 80% of people aged 5 or older speak only English at home. These statistics do vary by age group, as from age 5-17 and 65+ the number of people that are only able to speak English drops, but increases for those of 41-64 years. What explains this low rate of second language learning in the United States?

Part of the reason why many only-English speakers within the United States may think that they can get away with this is because of the United States’ position as a world power. Some may believe that wherever they go they will be able to find someone who speaks English. This does not excuse the fact that other people have put forth the time to learn English. In the global society that we now live in, speaking only one language is not acceptable. How can someone truly understand what it means to be a global citizen if they can only speak English?

Another cause for monolingualism is the lack of effective foreign language education. One can look at my experiences to see how someone can get through school without effectively learning another language. Out of all of the elementary schools in the U.S. in 2006, about 31% taught foreign language, and most of these courses only provided basic introductory language skills. This does not offer students a chance to develop their language skills at the best time. People who begin learning another language as children do better than adults who have only just begun. Denying children a proper foreign language education at a young age only encourages them along the path of being monolingual. They may not be aware of the potential that they have to be multilingual, and many are unaware of what they will be able to access if they learn another language.

Despite this, it is not impossible to learn another language after childhood. The Department of Education has invested funds to increase fluency in “critical need languages. One of these languages is Arabic. More encouragement to study Arabic is needed, as it is considered by some to be a highly difficult language to learn. More college students are also studying other languages as students are studying in other countries. While Arabic may be one of the least studied languages, its study increased from 1998-2002, although according to some it may be showing signs of slowing down. In order to increase multilingualism rates, schools should prioritize foreign language education, especially for younger students. Instead of making learning tedious, they could teach it in a practical manner with a lot of conversation practice. Plenty of free resources exist on the Internet that teachers can utilize. My school has an International Nightand & Spanish Immersion Day& every year, which are events that celebrate the culture and languages of other places. Schools could host events like these to raise awareness of foreign language programs and to promote the practice of language and the cultures they represent.

Being able to speak multiple languages can help out later on in life. If one wants to work for international organizations such as The Peace Corps, the Foreign Service, or the United Nations and travel to different countries around the world for their job, having knowledge of more than one language will come in handy, if not necessary. Even if one does not plan to do anything international, in many places, being bilingual can increase the amount of money that one can earn. Bilinguals are often more highly sought for employment than monolinguals. Speakers of Arabic in particular appear to be highly sought after in the U.S. due to the international significance of many Arabic-speaking countries.

It has been challenging, but I have tried hard to become fluent in Spanish. I also want to explore other languages. The monolingual stereotype bothers me, and I don’t want it to continue to exist. Learning another language has opened up new doors for me. I believe that in today’s world, learning another language should be an experience that everyone should have access to at a young age and continue to experience throughout their schooling. It doesn’t matter which language you learn; just go out and learn one, and you’ll find that soon you will hear more than you have ever known was being said! 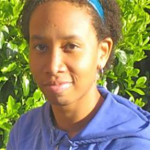