Have you ever seen or experienced bullying and the dramatic effects it has on its victims? My name is Emoni, and I attend Howard University Middle School. Every day that I come to school I see kids getting bullied. Bullying is a big problem for children, it knocks their self-esteem and makes them lose their confidence, and can make them dread going to school, therefor some key elements to stopping bullying in school would be for the principal to impose greater discipline and protect the victim.

First, bullying can take a lot of different forms according to Why Inc. those students who report being bullied, 3% were made fun of, called names, and insulted, 12% were the main topic of rumors, 5% were pushed, shoved, tripped, or spit on. When kids are being bullied, it can lead to more extreme things like self-harm resulting in suicide and can also lead to the bully murdering their victim. Students that are bullied are around 2 to 9 times more likely to consider suicide than non-victims. This shows that principals should take more action to prevent these extreme results.

Second, the reason why strong disciplinary actions should be taken in school is because often in school bullying is not taken seriously. If you punch a person in the face in the middle of the street you will probably be arrested, but if you bully someone in school, they call your parents, and the most you get is detention. I witnessed a classmate get bullied at school and there were no consequences. It is important not to allow things to happen in school that you would never get away with in the real world. Children who don’t have boundaries and sanctions imposed as they grow up may not obey the laws as adults so principals should take more action to prevent bullying.

Third, victims of bullying should be taught to be assertive without just being aggressive. They should be taught that self-defense is allowed when necessary and shouldn’t be punished for it. My friend was bullied every day in the 2ndgrade until one day she stood up for herself, this shows that victims of bullying need to know their self-worth so that they don’t just accept what’s happening to them.

Most victims have nightmares and flashbacks that bring them back to that horrible time of their life and haunt them long after school is over. Bullying can come in all forms, but no matter what stronger disciplinary action is needed. Students should be able to defend themselves without consequences. There is no one single solution for bullying, but it’s not good enough to ignore it just because it’s hard to deal with. 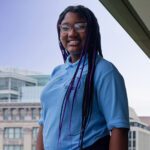