Battling AIDS in My City

Washington, DC is among the cities with the highest rates of STDs infection in the United States.  The term STD refers to a Sexually Transmitted Disease.  Teenagers between the ages of 15-17 years old are the fastest growing age group to join this dangerous statistic.  Our city’s mayor, Adrian Fenty, said in an interview about the rise of HIV/AIDS in Washington, DC, “Yes, we are one of the worst, not only in the region or the country, but in the world.  So the only way I know as a human being to solve a problem is to face it head-on.”  Did you know that one out of three people have HIV/AIDS in the Washington, DC area?  Many of the teenagers I know are not aware of this.

HIV/AIDS has a greatly negative effect on the black community in Washington, DC.  Washington DC’s Department of Health records indicate that since 1984, youth under the age of 25 have represented 5-6% of all reported DC AIDS cases. Additionally, 10% of the AIDS cases reported between 2001 and 2005 were represented by residents ages 13 to 24. These numbers increase as the disease has become an epidemic in this great city.

During the summer of 2009, I worked with MetroTeenAids, a non-profit organization in Washington, DC that is devoted to stopping the spread of STDs and STIs among youth.  The people that work there have devoted themselves to encourage youth to be safe and protect themselves when having sex.  They saw that the rising number of teenagers with STDs and STIs was a problem that needed to be addressed. During the summer, I learned so much from them about their cause.

This training provided me with up-to-date information about treatments for different sexually transmitted diseases, testing places, and statistics related to my work in our city.  I was surprised to learn that more than 20 different STDs and STIs have already been identified (www.std-education.com).  There are a lot of people that do not know this, because the only STIs that most people talk about are Chlamydia, Syphilis, HIV/AIDS, Gonorrhea, and Pubic Lice.  Chlamydia is the most commonly known and reported STD in Washington, DC.  It impacts both men and women and can be easily treated with the proper antibiotics.  An annual screening for Chlamydia is recommended for sexually active women 25 years of age or younger.

HIV/AIDS is still the most discussed and deadliest STD.  Washington, DC has the highest HIV infection rate in the country.  Some good news in recent years is that our city has nearly doubled the number of people who are being tested for HIV.  Dr. Shannon Hader, who is the city’s 12th HIV-AIDS director in five years, says that, “testing not only gets people into treatment early, it can slow the spread of the disease.”

After my first week as an official peer educator for the Department of Health and MetroTeenAids, I was placed into a group with three other peer educators.  Every year MetroTeenAids conducts surveys among local teenagers asking whether or not they are having sex, and if so, and they engaging in protected sex. As of June 26, 2006 their most recent survey reported that 93% of the heterosexual male teenagers reported that they were sexually active.  As teenagers also know, some of these people may not have been honest.  In the same survey, 71% of the heterosexual females surveyed said that they were also sexually active.

Finding out if you are infected early is so important because it can possibly save your life.  Still, some teenagers don’t understand this. Every time teenagers have unprotected sex they are potentially exposing themselves to STIs and most times you won’t have visible symptoms right away. This means you run the risk of passing STIs on to another person, and another, and another if you don’t get tested.  Every year MetroTeenAids has a huge number of teenagers who don’t call back to check their status.  This is startling because it makes me wonder how they can continue to go around having unprotected sex, not knowing whether or not they have an STD.  But regardless of your beliefs, it’s hard to argue with the logic that to be 100% effective against STIs, teenagers should practice abstinence because it is the only way of making sure that you would not get an STI.  If teenagers cannot practice abstinence, then they should both get tested before they have sex. 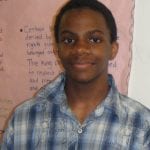